Today I am gonna talk about one of the most iconic watch of all time. Equally lauded and criticized, loved and hated. 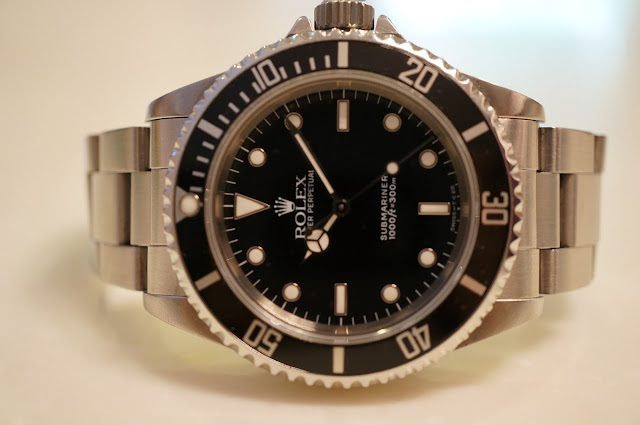 This is a T serial year 1996 model ref: 14060 powered by the Rolex caliber 3000.
This Rolex caliber have been heavily criticized by Walter Odets when he reviewed the Rolex Explorer ref: 14270 fitted with the same caliber. He did marvel at the accurate timekeeping of the movement though.
Models after the year 1999 (A serial and after) have been upgraded to a newer movement which is Caliber 3130 carrying ref: 14060M.
And on year 2007 (M serial and after) the watch is upgraded yet again with the movement Caliber 3130 now being undergone COSC certification. Model ref remain as 14060M.
So, the 14060 and the 14060M before year 2007 is fondly referred to as a "Submariner 2 Liner" (2 lines of text above the 6 o'clock marker reading SUBMARINER and 1000FT = 300M)
Whereas those manufactured on the year 2007 and after is called the "Submariner 4 Liner" (4 lines of text in addition to the SUBMARINER and 1000FT = 300M, there's also SUPERLATIVE CHRONOMETER and OFFICIALLY CERTIFIED) which adds 2 lines of text hence 4 liner.
All I can say is Chronometer certified or not, my Rolex Submariner definitely kept excellent time with a deviation of +-2 seconds a day!! 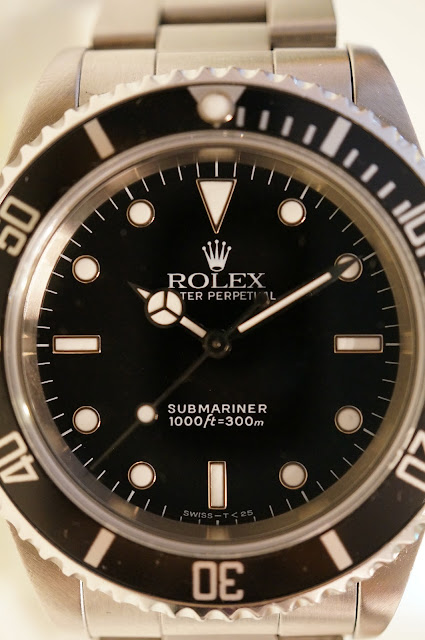 Just look at that dial.
This design has been copied so many times and not to mention all the fakes and replicas around that it's actually funny just thinking about it. Have anyone wondered why it's been copied or replicated so much? I would say it's because the design is universally appealing. The design slowly but surely draws you in.
The mercedes hands, the triangular / rectangular / round markers... all work in tandem, the whole package.
One mistake that annoy me is that alot of people refer this to the Submariner No Date or Sub ND.
In actual fact, this is called the Submariner.
And the other one is called the Submariner DATE.
Just something I want to clarify though.
I used to hate Rolex.
Yes... as a brand and everything.
Their watches seemed outdated, bracelets are flimsy, premium pricing and of course, the stigma that came with wearing one.
But I was wrong as I did not know that there are actually less blingy sports / professional stainless steel models like this one.
Understated, iconic, robust and reliable. 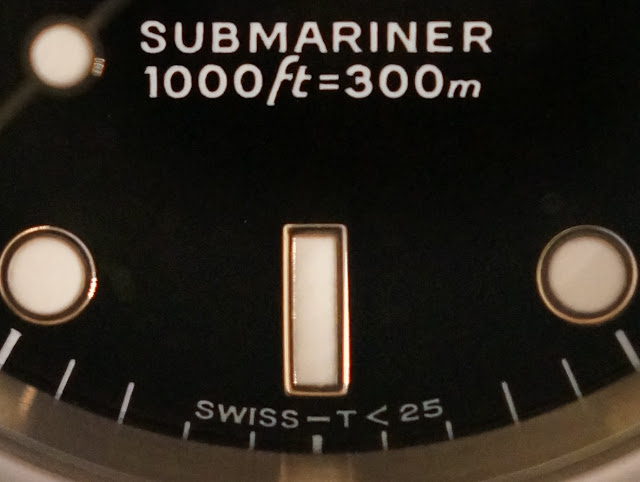 This being a 1996 manufactured watch meant that at the time, Tritium is still used as the luminous material.
As you can see below the 6 o'clock marker.
Swiss - T<25 as opposed to the newer Swiss or Swiss made.
The allure of the tritium dial and hands is that in time, the tritium will start to patina, which will cause the colour to change from white to cream and sometimes dark brown.
Rolex collectors seems to like it as it is something unique to the watch. No two watches will have the exact same patina. 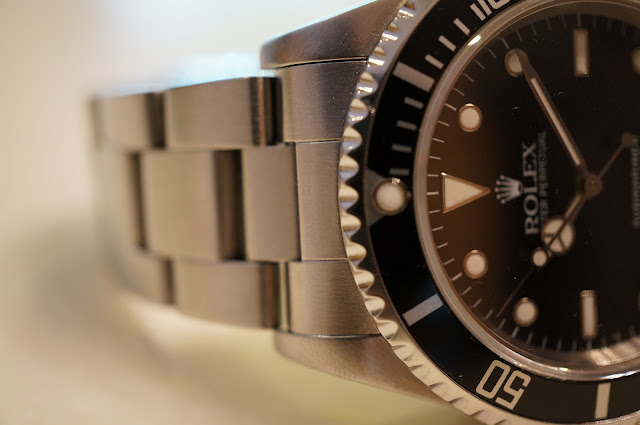 Unfortunately for me, when I bought this watch (online transaction), the bezel insert was a fake. So I had to go to my local Rolex Uncle to get it sorted out. Changed to a new original bezel insert but not with a Tritium pearl / pip... it's luminova.
So no patina on the pip for me to look forward to.
But at least watch is now all original. 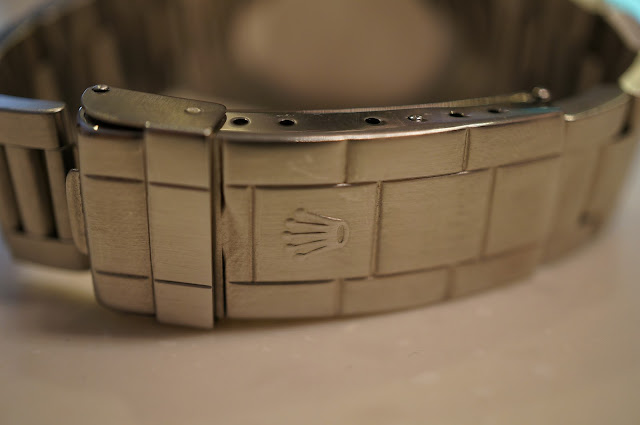 The most criticism for Rolex watches is targeted at the clasp and bracelet. Fondly called the "Tuna Can" bracelet and clasp.
Reason being the clasp is stamped pieces of thin metal (but strong) sheets and non solid bracelet links.
They rattle, they're lightweight.... but they work... for decades mostly without fail.
And they're extremely comfortable on the wrist.
The holes at the side of the clasp is for micro adjustments.
Can be done easily with a toothpick to adjust the fitting with 5mm increments.
But now, the modern Rolex with 6 digit references have all been upgraded with new solid links bracelet and new clasp construction.
As far as I know, the new ones works like a charm too... and feels sturdier and heavier. 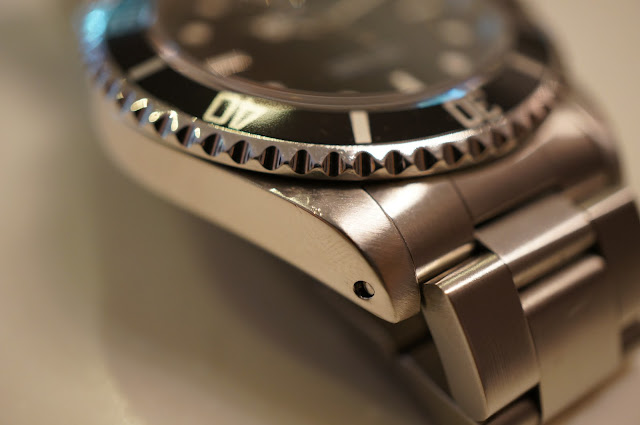 The Rolex Submariner is the only model which comes with drilled lugholes and still comes with non solid end links all the way until it's discontinuation this year (Replaced by the new ref: 114060). It makes it so much easier to change bracelets to Nato straps or leather straps. A toothpick is all that's needed. 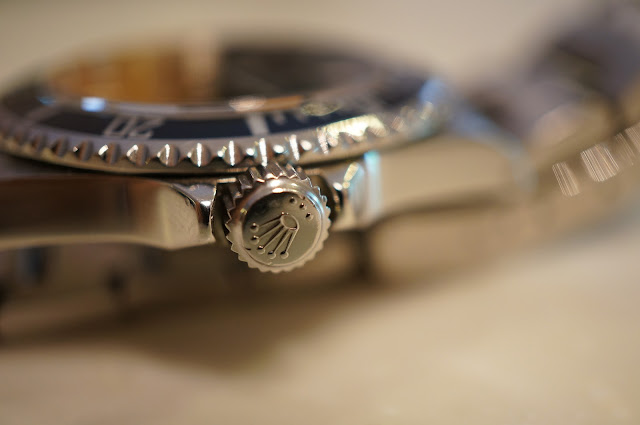 The 3 dots on the crown below the erm... crown means that Water Resistance is guaranteed to 300m depth.
This is known as Rolex Trip-Lock crown. 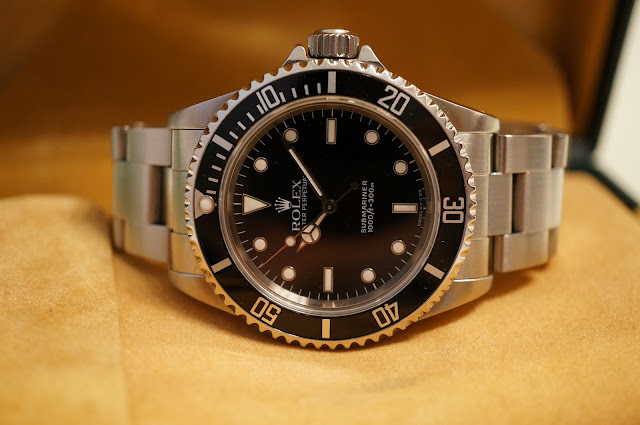 Love it or hate it, it is my opinion that a Rolex have to be present in any serious watch collection. Just wouldn't be complete without it. 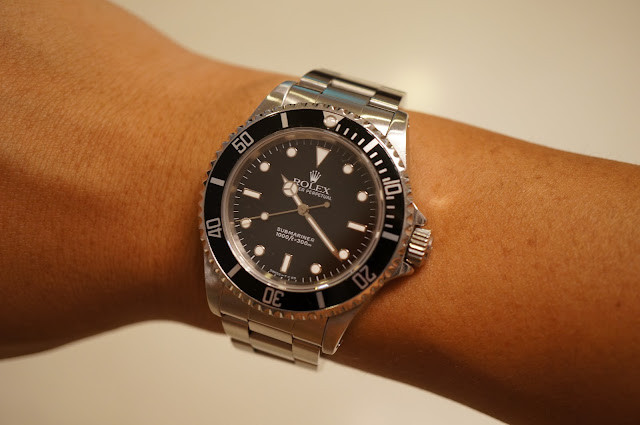 Until today, this Submariner is still one of the most comfortable watches I have ever worn.
A good friend of mine have pestered me to sell it to him for ages... and I suspect that I most probably would... only to "upgrade" to a 4 liner or the latest Ceramic Submariner ref: 114060
That is if I can afford it. :-)
Posted by hanz079 at 02:20